THE COLORS OF THE FUTURE

On February 21st in Parma, the kick off event of the 2019 festival Ottobre Africano.

Thursday 21 February 2019 - from 5 pm to 8 pm at the Ex Federale in via XXIV Maggio in Parma - the launch event of the project "I Colori del Futuro", within the XVII edition of the October African festival. A path of meetings with writers, artists, entrepreneurs and sportsmen in schools and in the centers of the city promoted by the Association Le Reséau; the Youth Center Il Federale and Pizzarotti Foundation with the Patronage of the Municipality of Parma

The goal is to educate to the enhancement of cultural diversities, often mistakenly seen as dangers or minus values, among young people from schools in the Parma area. In fact, the Association Le Reséau aims to stimulate students to openness and dialogue to grasp the opportunities for cultural enrichment in the phenomenon of migration and interethnic society, rather than stereotypes and reasons for conflict.

Outside the family, the school is the environment in which we acquire the values ​​that will accompany us throughout our lives. It is at school that the basic tools of social insertion are received, beyond the boundaries of the family nest. Thus, school plays a fundamental role as the primary educator for integration and interpersonal relationship, including aiming at avoiding divisions and discrimination on ethnic, linguistic, religious and cultural grounds. There cannot be social coexistence or cultural enrichment, if not through the learning of socialization dynamics based on principles of inclusion and mutual, shared respect. Including, if necessary, with an adequate integration of the educational systems aimed at preparing both parties to the problems of contemporary society.

Starting from this mutual awareness, the association Le Réseau with the collaboration and the contribution of Fondazione Pizzarotti has undertaken in the schools and in the aggregation centers of Parma the project "The colors of the future", with the aim of education to multiethnic coexistence and the valorization of cultural diversity in the Parma area. Thus supporting the school in combating stereotypes about the cultures of foreigners and Italian students who have a migratory experience.

The project aims to provide students with the relational skills necessary for positive interaction within an increasingly multi-ethnic community. It will reflect on the meaning of culture, on how much the environment in which one is born influences one's way of being, of thinking, of acting, but also on what meanings are hidden behind the word "straniero" and what is the perception of the other, experienced as "different from us".

The path, using different expressive languages ​​(images, videos, texts and poems) will be divided into several meetings and workshops organized together with cultural mediators, writers, artists and Italian and foreign athletes of excellence. An emphasis will be placed on the skills and competences acquired by the new generations. Among others, there will be the participation of artists such as Mohamed Ba (Senegal), Djana Sissoko (Italy / Mali) and Obehi Chris (Nigeria), writers with Judicael Ouango (Burkina Faso) and Takoua Ben Mohamed (Tunisia), young new generations such as Gordon Mensah (Italy / Ghana) and Kiasi Sandrine Emmepiutiu (Italy / Congo), entrepreneurs from the African diaspora such as Mehret Tewolde (Eritrea), sportsmen like Edwige Gwend (Italy). 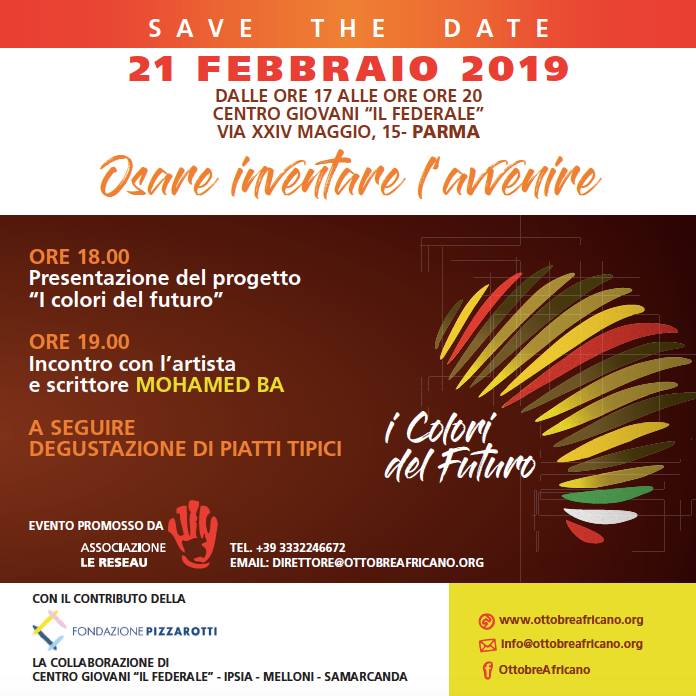